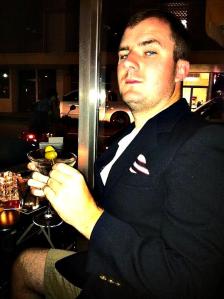 Kendle started HEP in June 2011. He is a soldier, writer, and instrument collector (though he feels this also makes him an amateur musician). Most of the show reviews are written by this one, though he is slowly losing ground to the juggernaut that is the L Writing Machine. Kendle dreams of one day being a professional science fiction writer or musical journalist for a magazine like Spin. In October 2011, he married L for her money and skills with a sword

L moved to Oahu and assumed her position as second in command at HEP in July 2011.  She is a part time teacher, artist, and bibliophile.  Her dreams include one day being able to afford her own personal library, writing an award-winning romance novel, and traveling the world.  In the mean time, she contents herself with her excessive myriad of blogs and amateur interior decorating.  In October 2011, she married Kendle for his good spelling and affinity for argyle.